Jeremy Hunt's coat as the Scots say is 'on a shoogly peg' and the resignation of his special adviser is clearly an exercise in backside covering.  And as the enquiry and evidence slowly emerges it will only get worse for Hunt - not better - even if he can muster a robust defence.  The vultures have circled and they will get their flesh.

The coalition set out to be different - less sleazy and more open than previous governments.  The grip of collective responsibility was supposed to be loosened to allow the two parties space to reflect their differences.

Well here is one area where the differences between Conservative and Lib Dems are vast (and indeed between the Lib Dems and Labour).  While senior Tory and Labour politicians bent over backwards (or indeed forwards) to accomodate the Murdoch monster, Lib Dems stood alone.  Vince Cable's comment that saw him removed from the BSkyB decision process, that he was going to war with the Murdochs was not news.

Nick Clegg should now demand Hunt goes.  This time two years ago he was an-anti politician - standing up against the vested interests, sleaze and expense ridden politicians.  He needs to reassert that side of him if he is ever to have a chance of rehabilitation in voters' eyes.  Hunt is toast and the longer he drags out the inevitable the worse for him and the coalition.  If Hunt wants to come back at a later date, the sooner he does the honourable thing the better for him.

And if Clegg is the catalyst for a swift resignation he can reassert both his independence and start to reclaim his anti politics inheritance from Labour who are desperately hoping we forget their complicity in the Murdoch love fest.

And by way of reminder that Labour are in as deep as the Tories - where did Mili minor go on day one of his leadership?  You guessed it... 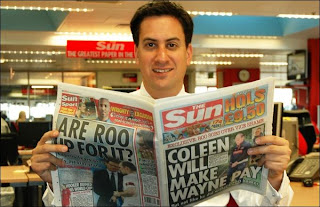