Earlier this month I blogged on the quite extraordinary splits in Brighton's ruling Green Party. Since then, instead of trying to come together, the splits have deepened and their councillors have indulged in some quite spectacularly stupid behaviour.

The Argus reports that rebel Green councillors: "launched a failed coup to remove Coun Kitcat (Council Leader)", reporting that: "One of the rebels Councillor Duncan said he was one of six Green councillors who walked out of the council chamber rather than support Coun Kitcat’s re-election as council leader."

In an extraordinarily stupid political move another of the rebels, Cllr Alex Phillips, tried - via Twitter - to get Labour to vote with the rebels to oust Cllr Kitcat.  Unsurprisingly the exchange ended up in the local paper: 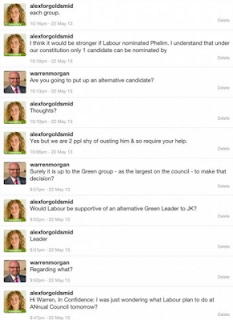 And amazingly, the Argus reports she has avoided disciplinary action for this move.

Councillor Duncan's thoughts on the split can be read in a gloriously spartist post on his personal blog:


"A prominent and much respected local councillor, Alex Phillips, attempted to build a consensus across the party divide between the Green Party, which she is a member of, and the Labour Party, to prevent a rogue Green administration..."