The news that an assassination plot has been made up uncovered by the Russian security forces, reminds me of a little known Tim Robbins film - Bob Roberts.

In that a folksy right wing populist candidate employs various underhand tactics in an attempt to win an US Senate seat and (spoiler alert) arranges his own attempted assassination.

Surely Putin must have seen the script?
Posted by Dan Falchikov at 23:19 No comments:

The first result of the Scottish council elections is in...

... Edinburgh will remain in no overall control as SNP decide not to field a majority slate.
Posted by Dan Falchikov at 15:16 No comments:

Here's Annie Lennox and Dave Stewart in 1989 sounding as fresh as they did 10 years earlier.

Sadly my enjoyment was ruined by YouTube's insistent on advertising a One Direction concert...

Godwin's Law is the internet rule that means anyone raising the spectre of the nazis or fascists as part of an internet debate is automatically deemed to have lost that debate.

So I am somewhat saddened to have received the following missive this morning:


When the votes are counted on Friday 4 May, it'll take only a small change in votes from last time to defeat the BNP and elect myself to the London Assembly. To make that happen and kick the BNP off the GLA we need to raise more funds for our campaign.

It will only take a small increase in the Liberal Democrat list to elect myself - and to push the BNP below the threshold for winning a seat. Any donation you can make really could make the difference between having a racist member of the BNP on the GLA - or myself, a Asian muslim woman who grew up in Tooting and has lived in London for decades.


Two things strike me. One is the almost 80s trot/Livingstonite highlighting of who she is rather than what she has done and second the somewhat unusual tactics of the message. The collapse of the BNP vote is highly unlikely to elect any more Lib Dems in London. To avoid the same fate as the BNP the Lib Dems need their candidates to come up with strong campaigns and clear messages about why they are different and their voices are needed on the London Assembly.

Sadly if this is the sort of thing the London campaign comes up with it will be a case of how many seats the party loses, rather than how many additional members are returned.
Posted by Dan Falchikov at 23:39 6 comments:

Posted by Dan Falchikov at 23:33 No comments:

The insolvency of one of the UK's largest and richest football clubs - Glasgow Rangers - has dominated the back pages for most of the week. And as each day goes by it becomes clearer that the regime of the dubious Craig Whyte was built on sand. The Beeb reports that the local plod are now investigating the apparent disappearance of £24 million in future season ticket sales.

But the place to go for real insight and analysis of the Rangers case is this rather good blog by a Scots lawyer, Albion Rovers supporter and Douglas Adams fan - with that pedigree you really can't go wrong.
Posted by Dan Falchikov at 23:10 No comments:

Ironic building of the week

The Winter Gardens in Great Yarmouth. Open March to October. 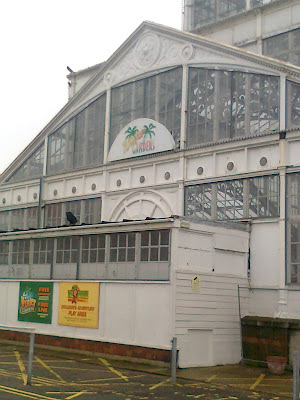 Posted by Dan Falchikov at 22:36 No comments:

Email ThisBlogThis!Share to TwitterShare to FacebookShare to Pinterest
Labels: Life

Here's Ziggy proving that not all glam rock was pants...

In 1975. And with another 17 years of Labour government to come to do something about it...

The clip is from the wonderful National Library of Scotland's Scottish Screen Archive - whose only failure is not to allow embedding of videos.
Posted by Dan Falchikov at 22:47 No comments:

Possibly the most intellectual graffiti ever... 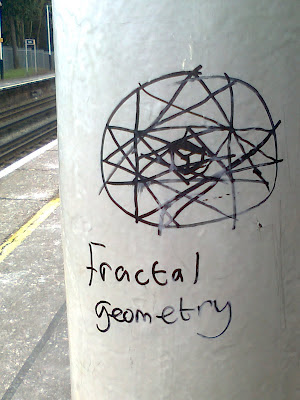 Spotted at Norbiton Railway Station this morning.
Posted by Dan Falchikov at 22:16 No comments:

Liberals and Liberal Democrats have always rejected a simplistic left right political spectrum so a group calling itself 'liberal left' is somewhat of an oxymoron.

The group is made up of the half a dozen malcontents who wrote to the Guardian last year backing the frankly bonkers, sub trotskyite, Compass 'plan B' economic policy.

Liberal left claim this plan B is "in line with the scope and timing proposed by the 2010 Liberal Democrat manifesto." They clearly have not actually read the manifesto they claim to be so attached to. What it said on the economy was as follows:


"The health of the economy depends on the health of the country’s finances. Public borrowing has reached unsustainable levels, and needs to be brought under control to protect the country’s economic future. A Liberal Democrat government will be straight with people about the tough choices ahead...Our working assumption is that the economy will be in a stable enough condition to bear cuts from the beginning of 2011–12."

So it is clear that Compass/Liberal left's purpose is not to promote the policies on which the party fought the last election or develop new policies (as that space is occupied by the Social Liberal Forum). Instead its leading lights Linda Jack and Richard Grayson, are seeking to work their passage into the Labour party - where their ridiculous and ill thought out views will no doubt be taken far more seriously than they are being taken in the Lib Dems.

Jack and Grayson, of course, have form - as they are already helping to develop Labour policy under the auspices of political opportunist and Labour right winger Liam Byrne. Byrne entered parliament following one of the most illiberal and right wing by-election campaigns seen in the UK.

Jack, Grayson et al need to decide - if they can't support the party's manifesto, its coalition strategy or policies and are happy to work with illiberal elements in the Labour party - what are they doing in the Lib Dems?
Posted by Dan Falchikov at 21:33 4 comments:

Davey shows Lib Dem ministers how to do it

Having been in his new job for less than a day, Ed Davey, has made an immediate impact with a single phone call.

The call was to the excellent Martin Lewis - the money saving expert - to talk about how collective consumer led switching of energy suppliers could work in the UK. Switching energy suppliers can save individuals around £300 - so a voluntary collective approach could bring big benefits for those who sign up.

It's the sort of principled Liberal policy other Lib Dem ministers - using their executive powers - ought to be pursuing. And working with respected websites like Money Saving Expert - with more than 13 million visitors a month also shows the way forward. One mention by Martin Lewis is worth approximately 52 mentions in the Guardian or Times.
Posted by Dan Falchikov at 23:42 1 comment:

Given today's events I couldn't resist...

Posted by Dan Falchikov at 23:52 No comments:

The self destruction of Chris Huhne has not been edifying. But the appointment of Ed Davey as his replacement is unalloyed good news for the Lib Dems.

Ed is a formidable campaigner - fighting the 'unwinnable' Kingston and Surbiton seat in 1997 - with no central help and a 15,000 Tory majority. The selection for the Tory nomination (between Richard Tracey and Norman Lamont) was seen by the media as the decisive contest. In the end Ed won by just 56 votes, but carried on campaigning so just four years later romped home with a majority of more than 15,000.

He has been regarded as one of the most able ministers - piloting through a deal that has delivered a long term future for post offices and ending once and for all the post office closure programmes of the last two governments. He has also equalised parental leave so that new parents can choose how to take their statutory time off between them.

In February 1997 - he was tipped by the Independent as a future cabinet minister in 2020 - saying:


...Davey became politically active as a student "discussing the minutiae of energy conservation and green economics" and conservationism is his big issue. He believes citizens should be viewed as "custodians of the environment and not just consumers".

He has made it with eight years to spare to a post he is eminently qualified for.
Posted by Dan Falchikov at 22:34 1 comment:

The January transfer window tends to be an anti-climax with more sound and fury than actual transfer activity. But not this year for my club - Hibs - who no doubt due to their perillous position have signed almost and entire new team of eight players.

The most interesting aspect is the signing of Honduran international midfielder Jorge Claros. Claros had a trial with Rangers, impressed their manager and all that was left was the dotting of the 'Is' and crossing of the 'ts' - except it didn't happen as Rangers couldn't find the finances to pay for it.

Rangers are facing multi-million pound tax litigation with the revenue and could face administration as a result.

So in stepped lowly Hibs and snatched him from Rangers grasp.

When was the last time the old firm were outbid by another Scottish club for a player?
Posted by Dan Falchikov at 09:05 No comments: