Seen in a north Kingston window this afternoon.  However, I'm still not sure it isn't about the European football... 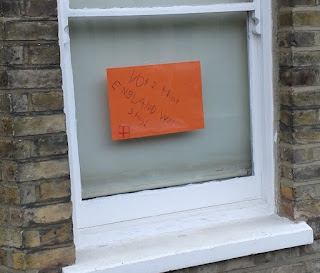 Posted by Dan Falchikov at 23:27 No comments:

On guns and murder

While the murder of Jo Cox is deeply shocking, our thoughts should be with her young family.  But we shouldn't forget that this is not a unique event.  Stephen Timms was seriously assaulted at an advice surgery in 2010 as was Cheltenham Lib Dem MP, Nigel Jones in 2000 - where his assistant Andy Pennington was killed.

Andy was also an elected representive - a local councillor for Hester's Way ward - which has somewhat been forgotten in all the outpouring of grief in the Westminster bubble.

The Guardian provides a history of attacks on UK MPs and it is not as rare as some might think.

But we should be grateful in this country - that despite the occasional outrage - we are relatively free from the sort of mass slaughter that is routine in the USA.  In this sobering map the outline of the States can be recognised just from the dots of mass killings since 2013.  Mass killings are defined as four or more deaths in a single incident.  More details here. 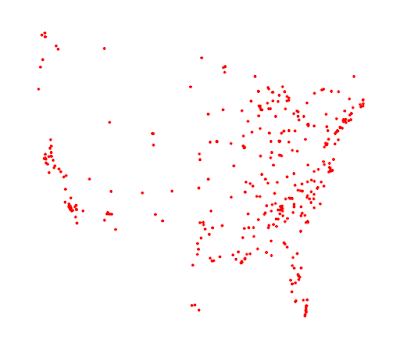 Email ThisBlogThis!Share to TwitterShare to FacebookShare to Pinterest
Labels: Guardian, Labour, Life, US

Kingston's Tory Council Leader, Kevin Davis is determined to change the face of the Royal Borough with a series of  developments of increasing scale, height and numbers of luxury home and decreasing numbers of affordable homes for local people.

While cutting youth centres and old folks' homes and putting up the council tax he has set up a £4m fund to encourage even more of his developer friends into the borough.  So it was of little surprise that he swanned off to Cannes in March for the annual property and booze fest that is MIPIM spending more than £4,000 of taxpayer's cash in the process.

So what did he get up to during his three day, four night Riviera junket?

According to my FoI request Cllr Davis attended three dinners courtesy of Scape Group, Countryside and the City of London Corporation.  He had drinks with the President of the London Chamber of Commerce and Industry, a 'think tank' (whatever that may be) with the Mayor followed by lunch, drinks courtesy of Barrett and half an hour with ex England centre half Rio Ferdinand - who was apparently doing some sort of a double act with Housing Minister Brandon Lewis.  Strangely, Ferdinand appears to have no connection with property development whatsoever, so one can only imagine what the purpose of that meeting might have been.

To be fair to Cllr Davis, it wasn't all pleasure he also packed in a large number of meetings with the great and the good of the UK property scene including:
One has to ask whether the same could have been achieved with a couple of zone 1-6 travel cards and a day return or two?

Which brings me neatly on to the most curious revelation - Cllr Davis appears to have forked out (from the public purse) £458.07 for a Nice to Cannes return flight. Now Cannes is a mere 17.5 miles from Nice airport and Cannes airport has no scheduled flights.  However there is a half-hourly helicopter service.


"Have you always wanted to make an entry in Cannes like a star? How about to land on the Croisette in a helicopter ? To mark the 2016 Film Festival and other events in Cannes ( MIPIM, CANNES LIONS FESTIVAL YACHTING, etc) AZUR HELICOPTER airline offers flights between Nice and Cannes in just 7 minutes, comfortably, and with stunning views on the Croisette!"

According to the Cannes or Bust website the express bus takes less than an hour from Nice airport to Cannes and costs just 33 Euro return (or about 20 quid).

So did Cllr Davis 'make an entry in Cannes like a star'?  And did the poor old council tax payer stump up for it?  I think we should be told...

Edit - the kind people at the Kingston's Residents Alliance Facebook page have pointed out Ferdinand does indeed have a property connection through his initiative called the Legacy Foundation.
Posted by Dan Falchikov at 12:38 6 comments:

It's been a while - but not as long as it has taken Hibs to win the Scottish Cup (which is the oldest football trophy in the world, by the way), so it's definitely time for a tune.

Posted by Dan Falchikov at 23:51 No comments: