From 15 years ago, the Manic Street Preachers first number one and the longest title of any number one in history (without brackets)...


A song that I felt at the time was relevant to the betrayals of the then Blair government - and  given the betrayal of this week well worth repeating.
Posted by Dan Falchikov at 22:54 No comments:

On 27 March 1963, Reshaping Britain's Railways was published - otherwise known as the Beeching Report.  So by way of commemoration here are (Michael) Flanders and (Donald) Swann with 'Slow Train' which runs through some of the stations that were axed as a result of Beeching.  The BBC's economics correspondent, Stephanie Flanders, is the daughter of Michael Flanders.

Posted by Dan Falchikov at 07:00 No comments:

Secret courts to go ahead after amendments fail

Oh well - several more Lib Dems will no doubt be considering their positions as a result.

Edit - following an idea from Roger Crouch, tomorrow I will be phoning the membership department asking them to change my membership subscription to the minimum.
Posted by Dan Falchikov at 22:22 1 comment:

Essex flapjack row - the Health and Safety Exec speak out

The Beeb reports an HSE spokesperson:

"We often come across half-baked decisions taken in the name of health and safety, but this one takes the biscuit.

"The real issue isn't what shape the flapjacks are, but the fact that pupils are throwing them at each other - and that's a matter of discipline, and has got nothing to do with health and safety as we know it.

"We're happy to make clear that flapjacks of all shapes and sizes continue to have our full backing."

It's not too late to lobby Peers on secret courts

The House of Lords votes tomorrow on the Justice and Security Bill and various amendements have been tabled to try to and undo the most illiberal parts of the bill.  Lib Dems against secret courts have helpfully provided a template letter that can be can download here and sent to Lib Dem (and Crossbench peers) - whose votes might just make the difference.
Posted by Dan Falchikov at 13:44 1 comment:

It's my 100th favourite so here's the Who with their original line up with Baba O'Riley from the mid 70s.

Posted by Dan Falchikov at 22:16 No comments:

An interesting take on the budget from Labour

Labour Uncut says the real winner of the budget is Nick Clegg...

Posted by Dan Falchikov at 09:44 No comments:

But he's not the first Liberal MP to seek chart success.  In 1981 then Liberal Leader, David Steel, teamed up with Scots musician Jesse Rae to cut I Feel Liberal-Alright!


I haven't been able to track down the track in its entirety - but there is some YouTube footage of HIGNFY featuring both Steel and I Feel Liberal-Alright!   And it's nowhere near as bad as it should have been.

Posted by Dan Falchikov at 01:01 No comments:

In all the publicity about the all party agreement on a new press regulator, the detail of the actual proposal has been somewhat overlooked.  Here's what the draft Royal Charter says (Schedule 4):

(b) “relevant publisher” means a person (other than a broadcaster) who publishes in the United Kingdom:

e) “news related material” means:
i. news or information about current affairs;
ii.opinion about matters relating to the news or current affairs; or
iii.gossip about celebrities, other public figures or other persons in the news
It's clear that bloggers would fall within the regulators remit (as indeed could your local Focus Editor) - so let's hope that the whatever 'statutory underpinning' emerges after the parliamentary debate clarifies who exactly is being regulated - because if it does involve bloggers I expect the new regulator will be kept very busy dealing with trivia.
Posted by Dan Falchikov at 19:58 2 comments:

It's Red Nose Day, so here's what 'One Way or Another' should sound like.

Posted by Dan Falchikov at 22:18 No comments:

News that the government is likely to drop plans for a minimum unit price is a welcome move - despite the predictable outcry from the medicine industry.

There is little evidence that problem drinkers would be put off - and the only benficiaries would be the supermarkets whose profit margins would rise.  As Philip Johnson says in the Telegraph "Britain’s problem with alcohol is less a function of price than of culture".  And minimum pricing does nothing to fix that.

Posted by Dan Falchikov at 10:52 No comments: 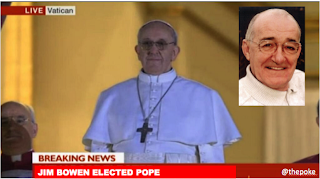 Email ThisBlogThis!Share to TwitterShare to FacebookShare to Pinterest
Labels: humour

The Lib Dem victory in the Eastleigh by-election has been widely signalled as the start of the Lib Dems' fightback and an acceptance that Nick Clegg's strategy in government is beginning to pay off.

But even before this weekend's conference rebellion on secret courts and high profile resignations by Jo Shaw and Dinah Rose, this analysis was wrong.

Eastleigh was no victory for Clegg or his strategy (if he has one) in government.  It was a victory for local activism - built up over the years - standing up for local people, doing the right thing by them where possible and explaining why sometimes you can't.  Clegg's hopeless responses as the Rennard storm engulfed him and the party were nearly responsible for throwing the seat away, when instead he should have been giving the local campaigners the cover they needed and deserved.

Because Eastleigh wasn't lost (when by all reasonable political analyses it should have been) - Clegg has been able to claim victory and in his latest missive to members talks about 'keep winning'.  But as this weekend's conference rejection of the leadership's illiberal support for secret justice, Eastleigh was a victory for the party's footsoldiers - and they know it.  Activists know that they - not Clegg - hold the key to the party's future success.

And that means Clegg's future is now out of his hands.  He cannot afford to carry on blithely ignoring the party in pursuit of some soggy centrist governance - like he has over secret courts.  The party is nothing if not liberal and it is demanding concrete liberal gains in government from his leadership.

This attitude is summed up by former Cambridge MP, David Howarth, who said of the secret courts issue, "This is not about policy or about deals: it is about who we are. This bill does nothing to help the security services to gain more information or foil more plots. All it does is give them an unfair advantage in cases where they are accused of kidnapping and torture. Again, anyone who cannot see that is fundamentally wrong and not liberal."

The party is now demanding red meat from its side of the government.  If it doesn't get it soon it will come for its pound of flesh - in the form of Clegg's leadership.

You can read Jo Shaw's resignation speech here.
Posted by Dan Falchikov at 23:17 No comments:

It's back.  So here is a catchy little number from Kenya and a slick political ad from the Jubilee Coaliton.  With almost all the votes counted it looks like Uhuru Kenyatta will win - the Independent Boundaries and Electoral Commission will declare tomorrow at 11am (8am GMT) - whether he has met the constitutional requirement of 50%+1 of the total votes cast, along with 25% of the vote in at least 24 counties.

Posted by Dan Falchikov at 22:32 No comments:

Posted by Dan Falchikov at 22:13 No comments:

It's only the last update because of the slowness of the count, but it is pretty clear that Kenyatta is going to win - whether by enough to get over the 50%+1 hurdle on the first round is slightly more contentious.  And because I have to go back to the UK in a few hours I won't be able to give any more updates.   So enjoy if you can the last one...

Around 5,750,000 more votes to be counted.
It's clear Raila Odinga is closing the gap slowly - but there seems almost no way he can do it quickly enough to win.
My best guess for the result is Odinga 43.6; Kenyatta 50.2 - thus avoiding a run off.
Posted by Dan Falchikov at 00:35 No comments:

With more than a third of the votes now counted and a robust defence from the IEBC about the validity of both the voting and counting processes, the results appear to be following a steady pattern.

The race has slightly narrowed overnight, but with more than a quarter of the votes now counted it looks like Kenyatta is going to be the fourth President of the Republic of Kenya.

Counting has become painfully slow - possibly due to the fact that the senior management of the Independent Elections and Boundaries Commission have gone home to bed.

Their absence has allowed the CORD alliance to go on the attack claiming serious flaws in the election process - enough in their view to change the order of the race.

Strangely, this mirrors their attacks in the 2007 election when they also claimed they lost due to irregularities.  More of that in the morning no doubt.

With the late closing polling stations only just shutting, counting has been slow, but Kenyatta's lead is narrowing slightly:

Posted by Dan Falchikov at 17:37 No comments:

Results coming in thick and fast as late opening polling stations begin to close and report their results.  More than 400,000 votes have now been counted and Kenyatta is leading Odinga by 230,000 to 170,000.  In third place is Mudavadi with 7,500 (less than 2%) and Nairobi housewives favourite Peter Kenneth is fourth with 2,200 (0.5%) - but with almost no counting from Nairobi and the suburbs.
Posted by Dan Falchikov at 16:06 No comments:

With many polling stations remaining open past 5pm (EAT) to deal with the queues of voters who are still waiting to vote, most of the counts haven't started.  But from the the 2.5% of presidential votes so far counted and reported Kenyatta is leading Odinga 68,000 to 57,000.

Turnout is reported at 86%.  But it is very early days.
Posted by Dan Falchikov at 15:41 No comments:

And they appear to be fed up with western reporting of their election according to this from the Daily Nation...

Kenya was braced at the crossroads yesterday amidst growing concern that the demand for clichés is outstripping supply...

Posted by Dan Falchikov at 10:11 No comments:

Kenyans go to the polls on Monday and with campaigning banned tomorrow the two leading campaigns held their final campaign rallies in Nairobi.  I'm not sure these pictures really do the scale of the Jubilee Coalition's final rally in Uhuru Park justice - where a quarter of a million people spent more than six hours listening to political speeches.  It puts Nick Clegg's town hall meetings into perspective: 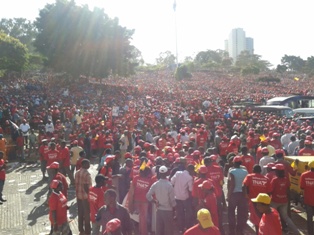 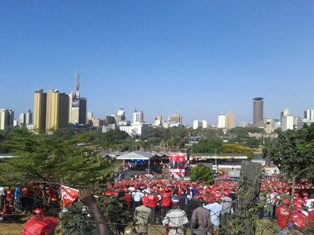 Posted by Dan Falchikov at 20:32 No comments: