Liberator 's blog reports that Lib Dem activists may be moving against Clegg as he "seems to have reached a stage in his leadership, where he can no longer disguise his contempt for his own party."

Clegg's speech at the conference of what's left of ALDC at the weekend certainly gave that impression.

I haven't heard anything that suggests an active campaign to oust Clegg, but I have heard from a number of sources within the party that Clegg had been planning to stand down as leader next February, with the aim of handing the baton on to Ed Davey.

The timing is significant in that it is a few months before the Euro elections and a new leader bounce might save the skins of four or five MEPs who are facing defeat if the party continues to bump along under Clegg's leadership.  MEPs are extremely important to the party's campaigning capacity with well funded offices and the ability to engage with voters in all parts of their huge constituency regions.

But the handover plan was apparently scuppered by the rise of Tim Farron - who now looks like the favourite to win a post Clegg leadership election.  A Farron leadership would be unlikely to enjoy such cordial relations with Cameron and the Tories and would certainly mean an end of the Clegg project.

The fact that these rumours are re-circulating perhaps suggests the plan is back on - with the Cleggites perhaps emboldened by Farron's internal troubles over his voting record on Gay marriage meaning he is no longer such a clear favourite.

But regardless of whether any of this is true - I think we are seeing the start of the party turning its mind to what a post Clegg leadership might look like.
Posted by Dan Falchikov at 04:00 2 comments:

Three of the bills failed to get on the order paper - but the remaining 40 form the so-called 'Alternative Queen's Speech.' And they manage to combine kneejerk reaction, right wing stereo typing, little England paranoia and downright nutiness - but all somehow strangely familiar.

Then I realised why - they had clearly been drawn up using the Daily Mail random headline generator...

Posted by Dan Falchikov at 23:54 No comments:

An interesting documentary on BBC4 about Mott the Hoople - if you can catch it on i-player I'd recommend it.  Anyway here they are from 1974 with the Golden Age of Rock n' Roll:

So who's voting UKIP?

Well if you believe the media it is disenchated Tories demanding the sort of nonsense announced in the 'alternative Queen's speech' by Peter 'Sven' Bone.

Well the Liberton and Gilmerton by-election last night in Edinburgh for once provides some hard facts about the nature of their (albeit still small) support north of border.  Thanks to the Lib Dems introduction of STV for local council elections we can see how votes transfer between parties - rather than just speculate.  So here's how real UKIP votes transferred:

While it being just one small sample what this suggests to me is that clearly the Tories are currently losing most from UKIP's surge (as the mainstream view suggests) but not as much as we are being told to expect.

Instead, what I find significant is the derisory UKIP - Lib Dem transfer.  What this says is the Lib Dems have completely lost the radical 'none of the above' vote, from those who have been disillusioned long term by the political system.  This is a direct result of the political 'strategy' adopted by the party since 2010 influenced by the world's worst political strategist - Richard Reeves - and still implicit in the current strategy which although sharpens the messaging still believes there's votes to be gained by proving you've become a 'serious party of government' (whatever that is).

Posted by Dan Falchikov at 23:47 No comments:

UKIP to hold their deposit in Aberdeen?

Latest news from the count seem to suggest so.  Hmmm...
Posted by Dan Falchikov at 01:05 2 comments:

Is this the best SPL table ever?

Taken from the Beeb earlier.  And likely to be the closest Hearts get to the sharp end of the Scottish leagues for some time - that is if they make it to next season at all. 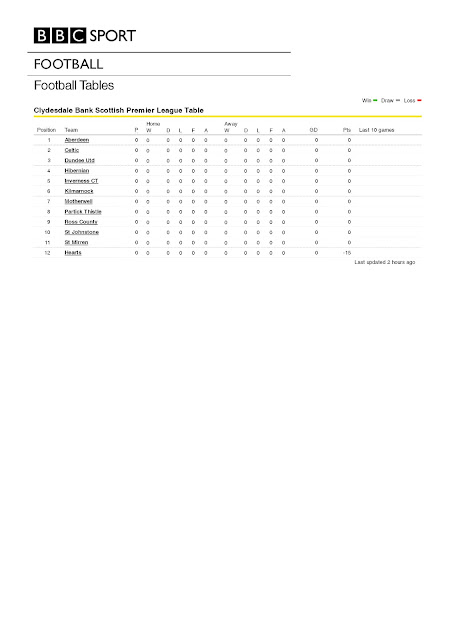 Posted by Dan Falchikov at 22:33 No comments:

It's the start of the festival season so here's one of Scotland's finest live bands.  Biffy Clyro with 'Many of Horror' at T in the Park.

Posted by Dan Falchikov at 23:30 No comments:

Posted by Dan Falchikov at 21:56 No comments:

Some rare footage from the Dunny-on-the-Wold by-election from 17 September 1987 with the late great Vincent Hanna.

Posted by Dan Falchikov at 00:30 No comments:

The ultimate unexpected item in the bagging area...

Posted by Dan Falchikov at 22:21 No comments:

With the release of Shane Meadow's Stone Roses reunion film - Made of Stone - it's appropriate to give Manchester's finest ever band an airing, so here they are with the much underrated 'Ten Story Love Song' from their second album

Ed Davey's annual fundraising dinner and auction was held last night in a Mayfair hotel.  With the keynote speaker - one Nick Clegg.  I suspect - given the number of corporate types there - a substantial five figure sum was raised.  A far cry from the days of chicken stew and a raffle for a bottle of Lambrusco in a local scout hut... 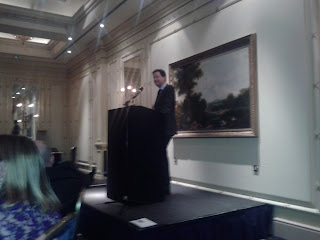 Posted by Dan Falchikov at 21:35 No comments:

Two articles on Lib Dem Voice caught my eye today - both from the so-called 'Better Together' campaign who are effectively the political wing of the Scottish Labour party.

One is written by Kirsty O'Brien, who fails to mentions she is a London based Labour hack - looking to become a Scottish MEP next year.  Confusingly titled 'London is not a foreign country' - er no because it is a city - she raises the bizarre spectre of her poor wee son having to get his passport out when visiting his Granny.

If you couldn't think it could get any more bizarre - we then have an article from Willie Rennie - who should know better - fantasising about in/out EU referenda with Scotland staying in and the rest of the UK leaving.

I'm pretty relaxed about the outcome of the Scottish vote - but the result will be determined by which side can inspire the most confidence in Scottish voters that they represent their longer term interests and will provide optimism for their economic futures.  Not this sort of hypothetical scaremongering.

...well it does if they are being promoted by Liberal Democrat run Watford Council.

The Guardian's John Harris - best known for his eulogies of britpop and Tony Blair - has taken to his keyboard in the idyllic Hay on Wye to write a piece attacking the Lib Dems for wanting to redevelop some less than idyllic derelict land by Watford General Hospital (along with some allotments) to expand the local hospital, provide much needed new homes - more than a third of which will be affordable - and provide new jobs. All the existing allotment holders will be relocated locally.

The most interesting contention made by Harris is that:


'The rest will be given over to development which seems to have little connection to health at all: houses, along with "business incubator and retail units"'.

Sadly for Harris he obviously hasn't read the rest of Friday's Guardian.  Because if he had he would have stumbled across an article by Sarah Hayward, Labour Leader of Camden Council titled 'How councils can take action to bridge the equality gap'.

In it Harris would have found the following:

'The report found that housing is an important issue because it impacts on the borough's social mix, community cohesion, health, educational attainment and employment.'