In a political coup worthy of Ken Livingstone's ousting of Andrew MacIntosh 24 hours after Labour taking control of the GLC in 1981, Kingston Tories have dumped their election winning leader just seven days after taking contol.

And in a move that will delight local Liberal Democrats, the Tories choice to lead the council is Kevin Davis.  Hapless Davis is well known to Lib Dems beyond the Royal Borough's boundaries - pledging (and failing) to oust David Laws in Yeovil in 2010 - just as he had done to Edward Davey five years earlier.  As a result of his lacklustre campaign in Kingston and Surbiton he was unceremoniously dumped by the voters of Berrylands Ward (scene of the 'Good Life') in 2006.

He is however not new to the leadership of Kingston Council, having been an executive member in the 1998-2002 Tory administration and Leader between 2001-2002 before losing the following election heavily.

As leader, the competence of his administration was in stark contrast to his overblown rhetoric:

He pledged to cut council tax, but under his watch it soared by 50%.  Davis was the first leader of Kingston Council to levy a tax of more than £1,000 a year.

In opposition he attacked the Lib Dems for increasing council staff numbers, failing to realise that under his leadership of the council a record 238 new staff were recruited in 2001/2. (The year the Council Tax hit £1,000).

He also made a fool of himself over several controversial schemes in Berrylands ward -where he attacked the Liberal Democrats for implementing them, when they happened under his watch.

And in a tear jerking post on his blog in 2007 - after losing out in the Tory parliamentary nomination for Kingston and Surbiton he said, "clearly my future no longer lies in Kingston".

But now in a puff piece in the local Kingston Guardian newspaper he is described as a 'PR guru', when in fact he runs a consultancy who seeks planning permission for property speculators.  This includes working for the developers of the controversial Surbiton Filter Beds scheme - which was finally defeated by residents (with the support of Ed Davey and the Lib Dems) after years of campaigning.

It promises to be an interesting few years under his leadership.

Posted by Dan Falchikov at 00:03 No comments:

Why I'm backing Libdems4change (despite the use of a '4')

Last Thursday's election results were a disaster for the Liberal Democrats.  But they were no isolated event.  They come on top of almost equally disasterous results (particularly in the big cities) over the previous four years.  In fact the party's losing streak began as soon as Clegg took over the leadership and before the party joined a coalition government in 2010.

The scale of that disaster is huge - no councillors in Manchester, Southampton, Islington, Lambeth or Lewisham (where just a few years ago we either ran the council or had high hopes of doing so), replaced as the official opposition in Liverpool by the Greens with a mere four councillors and returning just 118 councillors across all of London - more than half in just two boroughs: Sutton and Kingston.  And that's before you get to the utterly disasterous Euro results, after a campaign fronted by Clegg and promoting his European vision.

The leadership's initial reaction to this was crass and patronising - implying those losing candidates (of which I was one) didn't work hard enough.

And then Nick Clegg gave his view, saying in a 'lady's not for turning' moment:


I don’t begrudge anyone for raising searching questions, for asking challenging questions about strategy and about leadership, all of it. It’s the most natural thing in the world after the electoral losses of the last few very very difficult days. But the question is, is that really a shortcut to doing what the Liberal Democrats want to do for Great Britain. And I think that losing our nerve, buckling down, washing our hands of all the decisions, exactly at the point that our decisions are being proved right, would be the wrong thing to do.

But unlike Clegg I believe it is clear the party cannot go on as it is.  The party's strategy of essentially rejecting most of its previous support base in favour of a new centrist electorate who vote for governing parties has been tested to destruction.

It is perfectly possible to govern as radical outsiders trying to change the system - but this has been repeatedly rejected by Clegg and his team.  Instead Clegg argues that the Lib Dems can be either a party of protest or party of government - a line he has used ever since he was being advised by the world's worst political strategist - Richard Reeves.

So, Clegg gives me no choice.  He's not prepared to change a strategy and direction that can only end one way.  If he was, I would have no qualms about backing him - this battle is not, and should not, be about personalities.  But Clegg and his advisors are now wedded to a strategy that plainly is not working and if he won't change, he needs to go and be replaced by someone else who will make that change.

You can sign the Lib Dems for change petition here.
Posted by Dan Falchikov at 23:24 No comments: 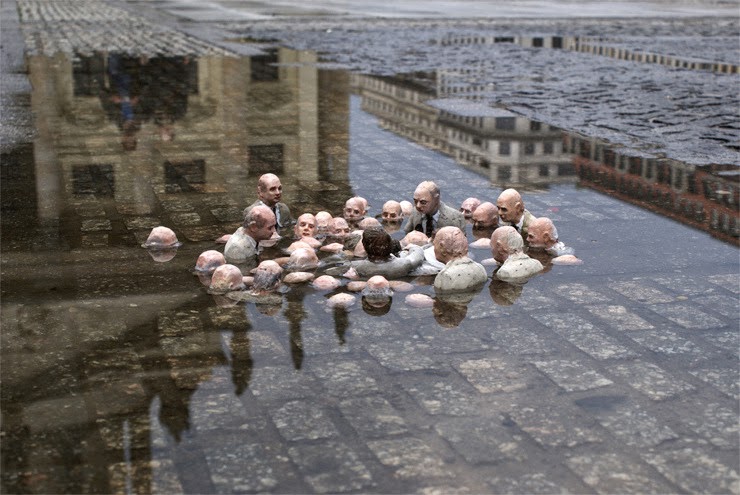 Actually it's a sculpture in Berlin by Isaac Cordal called Electoral Campaign.
Posted by Dan Falchikov at 19:26 No comments: