The news that Nick Clegg's 'world class' strategist, Ryan Coetzee, has been appointed to run the yes to EU campaign has at least one supporter: 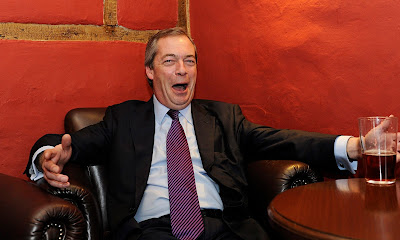 Put your money on a big NO vote...

Posted by Dan Falchikov at 15:18 No comments:

How the Lib Dems won a landslide in Grove

Cllr Jon Tolley writes about his campaign  on his blog.
Posted by Dan Falchikov at 14:02 No comments:

So what did the Lib Dems actually stop the Tories doing?

Today's budget rather gives the lie to the Lib Dem 'Scooby Doo' message of 'look what the Tories would have done if it wasn't for the meddling Lib Dems'.

The budget contained  two major public policy changes. Firstly switching the focus from the government subsidising low pay to the government forcing employers to pay a living wage.  And secondly lengthening the period of fiscal consolidation to smooth the public spending cuts.  These two changes would almost certainly (rightly) have been supported by the Lib Dems if they had remained in government (and the latter was basically the party's economic position two months ago).

The fact that both leadership candidates slammed the budget on the basis that the Tories were returning to right wing form without the Lib Dems was as predictable as it is wrong.  And it is extremely worrying for the future of the party that both contenders simply basically rehashed the disasterous Coetzee/Clegg messaging - the messaging that was comprehensively rebuffed by the electorate a few weeks ago.

The Scooby Doo message was ineffective as it relied on people understanding a bunch of imponderables - it's impossible to judge the effects of things that didn't happen.  And it was part of a wider failure of the Clegg leadership of failing to define a distinctive Lib Dem agenda for government meaning people could not tell what part of the coalition policy was down to which party.

But now that Osborne and the Conservatives have comandeered a fairly major part of both the Lib Dem and Labour economic policy and are likely to dominate the economic centrist space for the foreseeable future some rethinking is needed - and fast.

I don't expect Labour to come up with any credible rethink, but the Lib Dems must.  If whoever wins the leadership can't find a new and better vision for the economy that understands the values being promoted by Osborne's budget today, then there is little hope for the party.
Posted by Dan Falchikov at 23:24 2 comments:

Stumbled across this the other night.  And what's not to like a Quebecois rockabilly cover version of Blondies' Call Me...