The Beeb reports that plans - dating from 1945 - for a second rail bridge over the Firth of Forth have been recently uncovered in a Glasgow office.  Their provenance remains a mystery and Network Rail is asking for help.

But it shouldn't be described as a 'fourth Forth' bridge - given it dates from a time 18 years before the second one opened.
Posted by Dan Falchikov at 00:34 No comments:

Conservative run Kingston Council likes to consult its residents.  So much so it launched more than a dozen important consultations over the summer holidays.  This of course has the advantage of making it as difficult as possible for residents to participate.  And when your council leader enjoys a symbiotic relationship with some of the biggest property developers in the country, local residents just get in the way of maximising corporate profits.

So I was somewhat surprised to receive the other day a letter from the council asking for my views about a local housing issue. 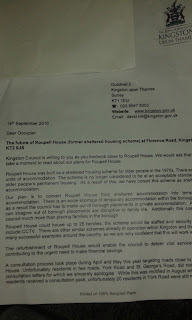 The letter however includes a bizarre explanation of council incompetence, "A consultation process took place during April and May this year...Unfortunately residents in two roads, did not receive consultation letters... While this was rectified in August where 140 residents received a consultation pack, unfortunately 20 residents in York Road were still missed ...This has come to light very recently.  We appreciate that this is an unsatisfactory situation..."

One has to wonder just how seriously Kingston Council takes its duty to consult its council tax payers - especially as they have told neighbours they won't engage with them until after the decision is made.
Posted by Dan Falchikov at 07:00 No comments: