The new Lib Dem summer campaign is an admission of failure

I had the dubious priviledge earlier in the week to listen in to Nick Clegg and a couple of his teenage acolytes (who are apparently big in the campaign department these days) launching the party's summer campaign.

It is rather strangely entitled 'A record of delivery' - which sounds like the CD you might buy on the way out of the new Postman Pat movie.  Nick Clegg - with his tin ear to party history - claimed this would be familiar to Lib Dem campaigners - referring to the ALC inspired 'Record of action' - but failing to understand the crucial difference.

Action is a word used by people on the street - it's what they expect their politicians to take   Delivery is what people who work for the Post Office (or indeed Lib Dem activists) do.

But one big criticism isn't the ugly, soulless (focus grouped) language (or indeed the typos in the document) - it is the fact that the party is now launching a campaign that one of these acolytes - Steve Jolly, the party's 'Head of National Campaigns' - says "Tell(s) voters that we have delivered a Liberal Democrat agenda in government"

I argued as long ago as September 2011 that the big failing of Clegg's strategy was his utter inability to communicate any sort of Liberal Democrat agenda for government.  So it is no wonder over the last four years that voters have decided this is a Tory government in all but name.

The other big criticism is the bit after the 'Record of Delivery'.  The 'Promise of More' works where Lib Dems have dealt with local concerns, campaigned for improvements and can point to solid successes over the years.  Sadly without that public acknowledgement that the party has achieved anything in goverment (which apparently the party's own polling recognises as a major issue) a promise of more sounds simply like a plea to keep Clegg and his dozens of (frightfully bright) advisers in highly paid jobs for another five years.

And the five policies that form the 'promise of more' are hardly going to set the heather on fire:
If that's the best Clegg and his vast team of SPADs can come up with then the game is really up.  It's a pathetic programme that show's he's run out of ideas going forward.  He's put the party in a place where he's trashed its past, failed to communicate any positive present and is now outlining a uninspiring, technocratic future (no doubt aligned again with Cameron's Tories).

In an interesting commentary on the YouGov website, one of the UK's top psephologists - Peter Kellner -  postulates some 2015 election scenarios that see the Lib Dems end up with just 19 MPs.

In it he states:

"Until the recent elections I assumed that the Lib Dems would regain some ground as next year’s election approached. Even if they remained well below the 24% they scored in 2010, most of their MPs would enjoy enough local support to minimise their losses.

"Now I am not so sure. That is, I still think that the Lib Dems could claw their way back to around 14%; but there is now a chance that they will remain stuck on around 8%."
And on 8% - the best scenario for the party is just 23 seats.

Kellner also turns perceived wisdom on its head that a narrow Labour lead equates to a small overall majority, stating "Labour must also abandon its hopes of winning an overall majority with a narrow lead in the popular vote. Depending on Lib Dem performance and the precise size of the Tories’ sophomore surge, Labour’s lead needs to be at least 3% and possibly 5%." 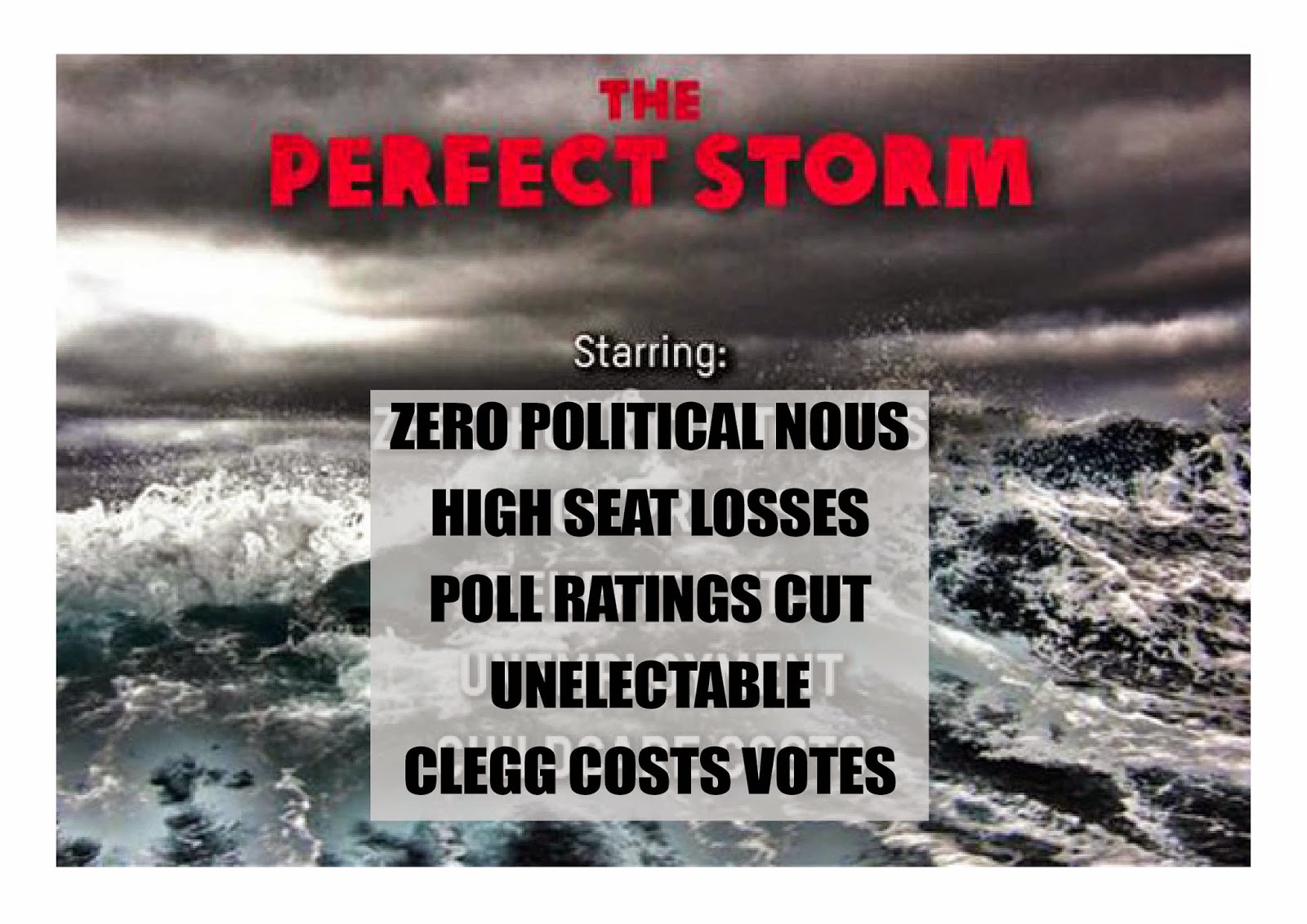 Posted by Dan Falchikov at 01:12 No comments:

Cleggonia wins victory in the battle of Newark!

"In the small hours of 6th June 1984 2014 the forces of Cleggonia won a massive victory over the lacky forces of Protasia!

With our glorious Conservasian allies the so called 'peoples army' of counter revolutionary bourgeois Protasia was destroyed in combat.  All hail Big Clegger!"

Rennard set to come back as general election director?

The Lib Dems are looking for a Director of General Election Strategy and the job description makes interesting reading:


Could this be the reason for Rennard's unexpected apology last week?  If it's not going to be Rennard - who ticks pretty much all the boxes - then who else could it be?
Posted by Dan Falchikov at 16:22 No comments:

Posted by Dan Falchikov at 21:47 No comments: