...the Taxpayers' Alliance. Although Clegg may not agree with their suggestion of abolishing HS2 to pay for it.
Posted by Dan Falchikov at 23:12 No comments:

Posted by Dan Falchikov at 23:58 No comments:

Time to end the CGT loophole

Capital Gains Tax (CGT) was the focus of the first disagreement between the coalition in the run up to George Osborne's first budget in 2010. Lib Dems were committed to increasing its rate to that of the individual's income tax and Conservatives wanted it kept at the 18% it was reduced to by Gordon Brown.

In the end a compromise was reached. A new top rate of 28% was introduced following Treasury advice that this would maximise tax take.

But the marginal rate of CGT isn't really the issue. For those people investing in property there is something called 'Principle Residence Relief' which allows them to disregard the three years capital gain before a sale - provided the property has been their principle residence at some point during their ownership.

It seems perfectly reasonable to discount the tax liability based on the time a person has actually spent in their property - but to give them an extra three years bonus is just a hidden bung for property investors.

It means you can buy a property - live in it for a few months while renovating it - let it out for three years, sell it and not pay a penny CGT despite the property increasing in value by tens of thousands of pounds.

Given the state of the country's finances and the general under taxation of property, ending this tax relief would seem a good way to raise revenue from people who can afford it and rebalance taxes a little bit further away from those on low incomes and onto property speculation.

Oh and you may have guessed I have been doing my tax return! (Hence the lack of posting)...
Posted by Dan Falchikov at 23:33 1 comment:

Staggers gets it wrong on 'moral capitalism'

The New Statesman has set two tests to see if David Cameron is serious about so called 'moral capitalism'. One is to withdraw the knighthood from Fred 'the Shred' Goodwin - the bank's former CEO. The other is to prevent the bank paying the current CEO, Stephen Hester, his million plus bonus.

Sadly these tests say more about the paucity of thinking on the Labour left than the glib Cameronian soundbite of 'moral capitalism'.

What RBS and the other banks need is a dose of hard anti-trust legislation. All of the banks - regardless of who owns them - need to be cut down in size and split up so the they can't use retail deposits to subsidise their casino operations. In addition they need to divest themselves of sufficient retail operations so they cease to act as a cartel and make space for true competition in the high street for deposits and loans.

By missing the essential big picture to concentrate on irrelevant ad hominem attacks, the Staggers is echoing its Labour masters. And if all Labour have to say on banking and the economy is to interfere with a bonus or two and withdraw a knighthood (that they granted) then they truly have lost the debate on the economic crisis.
Posted by Dan Falchikov at 23:17 No comments:

In memory of Etta James who died today aged 73 here she is performing Something's got a hold of me.

Posted by Dan Falchikov at 22:20 No comments: 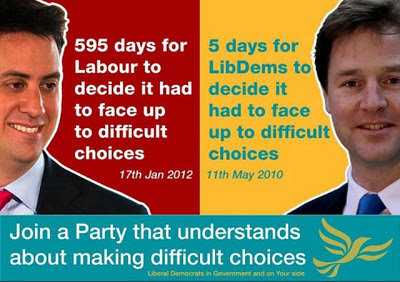 The Australian puts it very well.
Posted by Dan Falchikov at 22:42 No comments:

Why football fans should support this campaign...

My local newspaper - the astronomically titled Surrey Comet - has launched a campaign for the usurpers of English football - MK Dons - to drop the 'Dons'. The Dons is a recent historical reference to their aggressive take over of the true Dons - Wimbledon FC - who they renamed and moved 80 miles from their south west London home to Milton Keynes (the MK bit of their nomenclature).

The resurrection of Wimbledon is one of the greatest acheivements of the football supporters' movement in this country. The disenfranchised fans of Wimbledon set up their own club - AFC Wimbledon - recruited a new team and management and started in the 9th tier of English football - the Combined Counties League. They are now back in football league - just a division below the Milton Keynes version.

Given that Wimbledon's memorabelia - including the replica FA cup were returned to AFC in 2007 - it's time for MK to end the final link to their Wimbledon heritage. Back the campaign here.
Posted by Dan Falchikov at 23:53 No comments:

Email ThisBlogThis!Share to TwitterShare to FacebookShare to Pinterest
Labels: Football

I oppose the coalition's spending cuts. Except I support them.
Posted by Dan Falchikov at 08:51 No comments:

Posted by Dan Falchikov at 18:37 No comments:

Time for Moore to stop digging

Despite Michael Moore's (no doubt) best intentions the Lib Dem response to the Scots referendum question just digs a deeper hole for the party whose very existence north of the border is hanging on a shoogly peg.

The table on this report from the Beeb shows how the party has allowed itself to be painted into a unionist hole into which Alex Salmond is shovelling JCB loads of seperatist rubble. The Liberal Democrats as a party that has always backed home rule should not be seen to be impeding the properly expressed wish of a democratically mandated Scots government.

A period of silence from Moore, Cameron and Osborne on the constitutional question would be welcome - and might buy the Scottish party some breathing space to remove itself from the unionist hook it has impaled itself on.
Posted by Dan Falchikov at 21:28 2 comments:

How to lose a referendum in one easy lesson...

...get a quintessentially English prime minister from a priviledged background to issue an ultimatum to an autonomous small nation with a fear of said quintessentially English background. Then couch it in legal and constitutional terms that allows the populist (and popular) government to reject it in layman's terms that make their opponents appear to be arrogant and out of touch.

No doubt the champagne has been flowing in SNP headquarters today. Given the utter uselessness of the non-SNP parties in dealing with the SNP government in Edinburgh I'm not sure the timing or question of an independence referendum matters. Salmond will win it - whatever the question, whenever it is held.
Posted by Dan Falchikov at 23:38 1 comment:

Why I won't be taking Sainsbury's up on their kind offer... 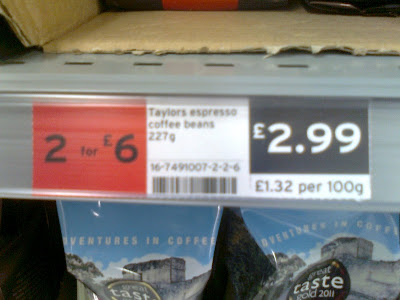 Posted by Dan Falchikov at 23:25 No comments:

The place to go for US campaign insight

With the GOP nomination contest heading towards two defining primaries in South Carolina and Florida later this month - informed insight is in short supply this side of the pond as seen by the fairly superficial beeb coverage. And it was the beeb afterall who thought 2010 election night in the UK was enhanced by Andrew Neil and drunken vacuous celebs on a boat in the Thames.

Anyway I came across this wonderful publication earlier - which has the sort of knowledgable insider view of campaigning and elections that is sadly lacking in the UK (about both here and overseas).
Posted by Dan Falchikov at 00:32 No comments:

Email ThisBlogThis!Share to TwitterShare to FacebookShare to Pinterest
Labels: Beeb, Elections, US

Doing the rounds on Facebook at the moment is to post the number 1 single in the charts the day you were born. And due to a new year lack of creativity I thought I'd steal the idea. So here, filmed in an evocative 1960s London, is Jackie Trent with Where are You Now, My Love...

Posted by Dan Falchikov at 19:26 No comments:

Ronald Searle was both a brilliant cartoonist and very brave man.

Without his satirical cartoons there would have been no Scarfe or Steve Bell. But he is probably better known for creating the St Trinian's series of quintissental English havoc reeking private school girls.

It is now a listed building - partly because of the Searle connection. Several moves later - including a flit to the border town of Galashiels the school closed on the death of Miss Fraser in 1946.

Wikipedia has more here...
Posted by Dan Falchikov at 05:17 No comments:

The usually reliable Lallands Peat Warrior has got his knickers in a twist (or possibly a fankle) over the powers the Scottish Secretary - the usually invisible Michael Moore - has to determine the constitutionality of an independence plebisite.

It is quite clear - any referendum that says yes to Scottish independence - regardless of who organises it will be final. No Westminster based politician is going to block a democratic vote by the Scottish people.

The SNP and their online supporters should stop worrying about the minutiae of the existing constitutional arrangements and the upcoming Scotland Bill - what matters is their confidence in holding and winning a referendum. And I for one can't believe anyone north of the border takes anything Moore, Rennie or any other Liberal Democrat says seriously as they have made themselves entirely irrelevant to the constitutional debate by siding with those who call themselves 'unionists'.
Posted by Dan Falchikov at 00:59 No comments:

While not wanting to underestimate the worries caused by the PIP breast implant scare, one can't help thinking that self interest might have something to do with this.
Posted by Dan Falchikov at 01:53 No comments:

Backing 'none of the above' in Liberal Voice poll

Lib Dem Voice is holding its annual Liberal Voice of the year poll. And a pretty unispiring choice it is too.

Two of the short list stand out: Mohamed Bouazizi - whose self immolation (ahem) sparked the Tunisian uprising - and Chinese human rights campaigner Ai Weiwei. But neither's actual political views are definitively known to be liberal rather than simply opposed to oppression and injustice. The rest of the shortlist is a ragbag of names who may have uttered something vaguely liberal at some point in the last thirty years.

It's obviously not to be taken too seriously, but surely the chaps at Lib Dem Voice towers could have produced a more reflective list of truly liberal movers and shakers than they did?
Posted by Dan Falchikov at 01:45 1 comment: