Hamish McRae wrote an interesting article on income inequality and  the recession in Monday's Evening Standard quoting a report from researchers at UBS.  In it they stated that the loss of personal income due to the recession in the UK has affected all income groups pretty evenly - which contrasts with most of mainland Europe and the US where the fall in income for the richest 10% has been much less than for the poorest.

I've finally tracked down the report on the web here and I've reproduced the table that compares income falls over the last five years by decile: 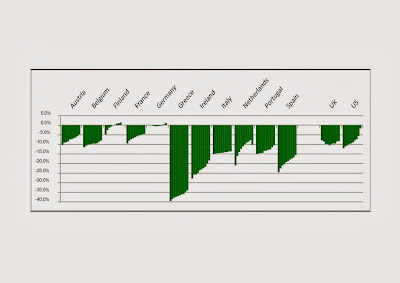 One can't help wondering that the UK would look much more like the US and most of Europe if the Tories (or even New Labour) were governing on their own.