Tory and Labour councillors in Edinburgh today joined forces to take a farcical decisions that will cost the taxpayers of Edinburgh millions of pounds.

Edinburgh's tram project has been beset by trouble since its inception under the previous Labour administration. Like Donald Dewar's Parliament building it is hideously overbudget and beset by contractual difficulties.

The cost of cancelling it is now greater than the cost of part completing it from the city's airport to St Andrew's Square in the heart of the city. Originally it was supposed to go all the way to the port of Leith. 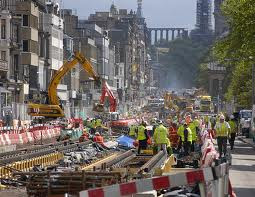 Instead of biting the bullet and agreeing to get the tramline partially built Labour and Tory councillors voted for a nonsense option to cut the line back even further to Haymarket.

So once opened instead of making a profit the tram will require an annual subsidy of £4 million, passengers to and from the airport will have to change onto a bus to get to the main centre and city centre businesses who have put up with months of disruption will get no benefit for the pain they have suffered.

The already laid tram tracks along Princes
Street will be left to rust. 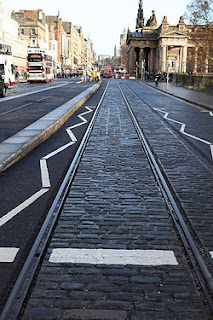 And most ludicrously the contractors who have messed things up may be entitled to walk away with full payment of its costs. The Scotsman has the full report here

It's clear real civic leadership in Edinburgh is coming from the Lib Dems - their coalition partners the SNP irresponsibly sat on their hands. Labour and Tories appear content to snipe on the sidelines and risk huge liabilities on the public purse just to embarrass the Lib Dems. With elections for the council next year one hopes the good burghers of Old Reekie remember who battled to try and prevent the trams from becoming Edinburgh's second 'disgrace'.
Posted by Dan Falchikov at 21:25