A history of Kingston by-elections in one clipboard...

Had a reasonably enjoyable evening canvassing in the Grove ward by-election (the third one in my time in Kingston).  It's pretty clear that it's going to be a close run thing between the Lib Dems and the Tories, with a chunk of previous Lib Dem voters looking at Labour and the Greens as alternatives because of their dissatisfaction with the government.  Sadly for them - given the Greens are more than 1,300 votes behind the Lib Dems and Labour 1,400 - the only impact an improved vote for these parties can have is to hand the seat to the Tories.

But I did get my favourite clipboard to hold my canvass sheets in.  It has stickers from a variety of historic local elections Kingston - going all the way back to 1981 when the late Jean Godden won St James's ward from the Tories.  The Janke in the 'Harris, Janke, Tilley' sticker is Barbara Janke - who recently stood down as leader of Bristol City Council and the 'Oates' in the top right sticker is the Jonny Oates who is now Nick Clegg's chief of staff. 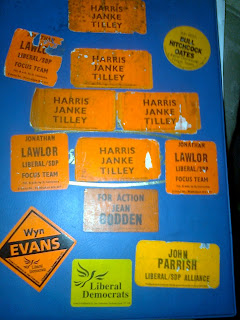 But the most interesting thing is the change of emphasis from 'Focus' and 'Action' to party labelling and logos.  No doubt encouraged in the late 1980s by some ex-SDP suit with a mission to turn a campaigning party of local interests into a 'serious party of government'.  A mission tested to destruction by the actions of their likeminded successors - like Richard Reeves - who have failed to understand that being in government is not an end, but a means to an end.