One hundred years ago Tommy Sopwith opened an aircraft factory in Kingston - in a converted ice skating rink.  Later he moved to new larger premises on Canbury Park Road a few minutes from the railway station - now converted into flats.

Tommy, of course became famous for his first world war fighter plane - the Camel.  Sopwiths later merged with Hawker and in the second world war Kingston produced the Hawker Hurricane - the aircraft that won the Battle of Britain.  Hawkers later became part of BAe, but not before their engineers had designed and built the Harrier jump jet.  Sopwith died in 1989 aged 101.  He was interviewed a few years before by Raymond Baxter for the BBC:


So it is fitting that this aeronautical history has been remembered - despite the focus of festivities being elsewhere over the weekend.  Kingston market place has a small number of exhibits - including this replica Camel. 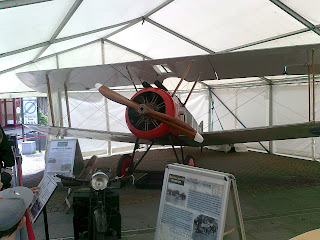 Kingston aviation archive  has far more information and it seems to me that the council ought to be making much more of the town's crucial role in UK aviation.  Hopefully the weekend's events will prove to be the start of something bigger.
Posted by Dan Falchikov at 23:47