Are the BNP one of No to AV donors?

At the end of March the Yes to AV campaign published its list of major donors. It challenged the No campaign to do the same. 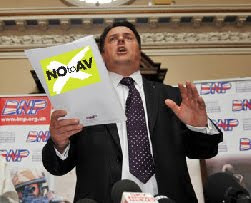 The no campaign refused to do so at the time. And to this date it still refuses to do so. Is this because Nick Griffin's racist party has donated cash to their campaign? Or is there another reason?
Posted by Dan Falchikov at 01:03