With the Tory press doing their best to try and pin a driving offence identity swap on Lib Dem Energy Secretary, Chris Huhne, one can't help be reminded of a previous case involving an MP. 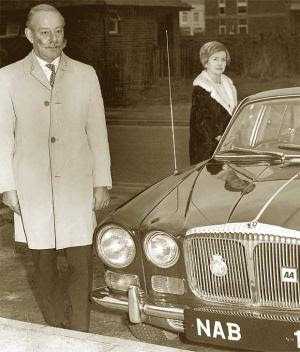 In this case the MP was outspoken Tory right winger (and Lord Bonkers lookalike) Gerald Nabarro. In 1971 a Daimler bearing the registration number 'NAB 1' was seen to be driving dangerously on the wrong side of the road in Totton Hampshire. An eye witness claimed a moustachioed man was behind the wheel and Nabarro was fined and banned, despite claiming his secretary was driving.

He appealed and new witnesses came forward to corroborate his story, but unfortunately he suffered two strokes and died shortly after. The Daily Echo has a good account of the story here.

In another twist his parliamentary secretary at the time was Christine Holman - better known now as Christine Hamilton.

I doubt whatever the outcome of the Huhne case - and it looks more and more like simply the fallout from his messy divorce - it is as unlikely to be anything like as colourful as the protagonists in the Nabarro case.
Posted by Dan Falchikov at 19:50