Last night Centre Forum hosted a session on what makes for successful coalition politics for a junior coalition partner. 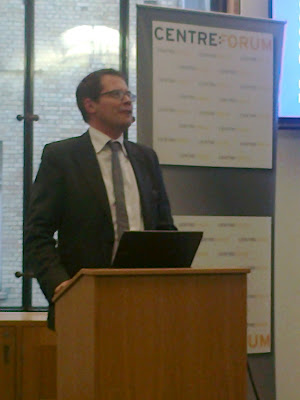 Things were kicked off by a presentation by Ben Page (pictured) from MORI whose research shows the Lib Dems having lost 2/3rds of its 2010 support and made reference to various research papers that show junior partners, such as the Irish PDs, always lose out.

What I found most worrying by the session was the general acceptance that this collapse of support is the end point of analysis (not the starting point) and there was little sense that the party needs to find out more about why people have stopped voting for it. 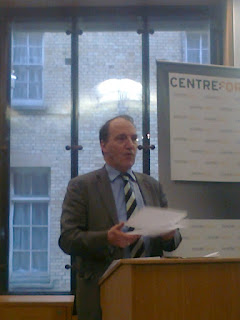 Simon Hughes then spoke about five themes that the party could promote at the 2015 general election. This mainly consisted of being 'competent and fair' - more competent than Labour and more fair than the Tories. Which is neither a strategy or a campaigning position.

It is clear there is a huge vacuum at the top of the party - with no strategy for either coalition or the next election. Merely becoming a party of government and governing cooperatively and reasonably is not an election winning strategy - even if some of those advising the leadership appear to think it is.
Posted by Dan Falchikov at 23:37